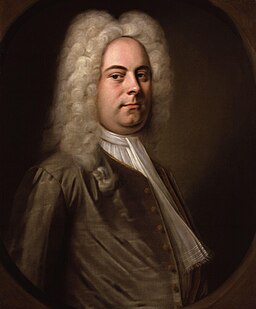 Georg Friedrich Händel (later Anglicized to George Frederick (or Frideric) Handel), born February 23, 1685, was a German (and later British) baroque composer. Händel’s father was a barber and was not keen on his son pursuing music. Some say that Händel had clavichord hidden in the attic of his Halle home where he secretly practiced music. While it is in doubt by some that this is true, Händel somehow must have had access to a musical instrument in order to pursue his interest.

At an early age, Händel had an opportunity to play the organ and be noticed by Duke Johann Adolf I. Soon after, the Duke recommended musical instruction for Händel and the Halle parish church organist Friedrich Wilhelm Zachow became Händel’s first instructor. Some of Händel’s musical characteristics can be traced back to Zachow’s style and preferences.

Honoring his father’s wishes, Händel began the study of law at the University of Halle, but soon dropped out to pursue music as his career. Händel taught private lessons and performed in churches, but his exposure was limited. While he played violin, it was his skill on the organ and harpsichord that provided him opportunities to perform in operas.

In 1705, Händel debuted his first opera composition, Almira. Soon after, he went to Italy, where he composed the operas Rodrigo and Agrippina.

Early works in our collection

After Händel’s move to London in 1710, he was commissioned by the manager of the King’s Theatre to write the opera Rinaldo which helped Händel gain the significant acclaim that he had for the remainder of his career.

From the opera Rinaldo, composed in 1710 and part of our collection:

From Amadigi di Gaula, composed in 1715 and part of our collection:

Händel at the Royal Academy

In 1724, Händel composed perhaps his most enduring opera Giulio Cesare for the Royal Academy of Music. Find the complete text to all 45 arias at https://www.ipasource.com/composer/h/handel-georg-friedrich-1685-1759.html?search=giulio-cesare#giulio-cesare. Here are a few of the most famous arias from this opera.

In 1726, Händel made London his permanent home and became a British citizen.  It was at this time that he also Anglicized his name to George Frederick (or Frideric) Handel.

Händel composed his famous oratorio, Messiah, in 1741. Take a deeper dive into Messiah, including links to 17 texts in our collection as well as listening links, in our blog post here: https://wp.me/p8x5Kd-ce

During a London performance of Messiah, King George II stood during the Hallelujah chorus, which in turn created the tradition of audiences standing when the chorus is sung.

Händel died April 14, 1759, and is buried in Westminster Abbey. View all 385 texts from 47 operas and oratorios and cantatas on IPA Source as set by Georg Friedrich Händel at: https://www.ipasource.com/composer/h/handel-georg-friedrich-1685-1759.html

This site uses Akismet to reduce spam. Learn how your comment data is processed.