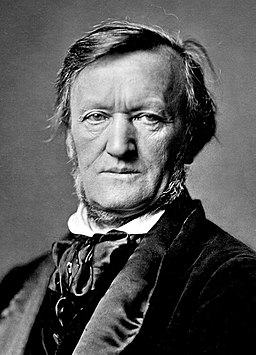 Wilhelm Richard Wagner (Richard Wagner), born May 22, 1813 and died February 13, 1883, was a German conductor, polemicist, dramatic composer and theorist. Wagner had a revolutionary influence over the course of Western music. Unique to most opera composers is the fact that Wagner wrote both the libretto and music for each of his stage works.

Wagner was born in Leipzig, where he was the ninth child of Carl and Johanna Wagner. Wagner’s father died just six months following his birth, and his mother likely married (there are no official records) Carl’s friend, Ludwig Geyer. Until his was 14, Wagner was known as Wilhelm Richard Geyer. It is thought that Wagner likely believed that Geyer was his father.

Johanna and Ludwig Geyer moved to Dresden (from Leipzig) when Wagner was one year old. Geyer loved the theatre, and young Richard embraced that love as well, even taking part in some productions. Geyer died in 1821, and Geyer’s brother funded Richard being sent to Kreuzschule, a boarding school. It was there that Wagner wrote his first play, Leubald, which was strongly influenced by Shakespeare and Goethe. Determined to set the play to music, he convinced his family to permit him to have music lessons.

When his family returned to Leipzig in 1827, Wagner’s instruction continued. Beethoven was a big inspiration to Wagner, and he wrote several piano sonatas and orchestral overtures during this period.

Wagner enrolled in Leipzig University. Wagner was a non-conformist at his academic studies and was attending primarily for student life. During this time, he composed Die Feen, his first opera. He also held a brief appointment as musical director at an opera house in Magdeburg.

Wagner married actress “Minna” Planer in 1836. In 1837, true to many of his tempestuous relationships, Minna left Wagner. Wagner then moved to Riga (at the time in the Russian Empire) and served as a director in the local opera. He soon reconnected with Minna.

Early works from our collection of arias set by Richard Wagner:

Wagner and his wife had so much debt that they fled to avoid creditors. It was on a stormy sea passage to London that he had the inspiration for his opera, Der fliegende Holländer.

Rienzi was accepted for performance by the Dresden Court Theatre in the Kingdom of Saxony. Wagner then moved to Dresden in 1842. Richard Wagner lived in Dresden for more than 20 years. In 1843, he was appointed to the life-long post of Royal Kappelmeister. A number of his works were performed in the Semperoper.

Richard Wagner was politically influenced by the musical director August Röckel, posting calls to action in “Volksblätter,” published by Röckel. Wagner also called for freedom of the individual. This desire to establish a parliamentary system was in conflict with King Friedrich. Wagner the revolutionary was one of several prominent figures who took part in the Dresden uprising of 1849, where he acted as a guard and dispatch runner. His face appeared on “wanted” posters around the city, and he abandoned his post as Royal Kappelmeister when he fled to Saxony to escape arrest. It was 20 years before his works again appeared on opera programs in the city. (https://en.wikipedia.org/wiki/May_Uprising_in_Dresden#Prominent_figures_amongst_the_revolutionaries ).

Wagner and Minna finally parted after Wagner’s affair with poet-writer Mathilde Wesendonck and his years in exile in Switzerland, Venice and Paris. Wagner returned to Germany when the political ban was lifted in 1862. He settled in Biebrich, on the Rhine. It was here that he began his work on Die Meistersinger von Nürnberg. In 1864, King Ludwig II, proposed to stage several Wagner operas, including Die Meistersinger. Wagner was brought to Munich, and the King settled Wagner’s outstanding debts. The National Theatre Munich premiered Tristan und Isolde in 1865. During this time, Wagner began an affair with Cosima, the wife of Tristan conductor Hans von Bülow. Cosima gave birth to a daughter named Isolde. Wagner was Isolde’s father. Eventually King Ludwig asked Wagner to leave Munich, due to the scandal.

Minna died of a heart attack in 1866 in Dresden. Following Minna’s death, Cosima asked Hans von Bülow for a divorce, which he did not grant until after Cosima and Wagner had two more children together. Wagner and Cosima were married in 1870.

In 1871, Wagner moved to Bayreuth, the location of his new opera house. The Bayreuth Festspielhaus has completed after a number of delays due to funding, and it opened in 1876 with the performance of Das Rheingold.

Following the festival, Wagner took on commission work to help pay off the deficit in funding following the 1876 performance. He also began work at this time on Parsifal, his final opera.

Wagner dealt with political exile, turbulent love affairs, poverty and repeated flight from his creditors until near the end of his life. Richard Wagner was a lifelong anti-Semite, and his positions and writings were carried forward even after his death by his wife Cosima and other family members. Deutsch Welle has an article discussing Wagner’s anti-Semitism and how to reconcile his hatred while appreciating his music: https://www.dw.com/en/the-hateful-side-of-wagners-musical-genius/a-16850818.

Wagner died in 1883 of a heart attack. His body is buried in Bayreuth.

Art songs from our collection, as set by Richard Wagner:

This site uses Akismet to reduce spam. Learn how your comment data is processed.