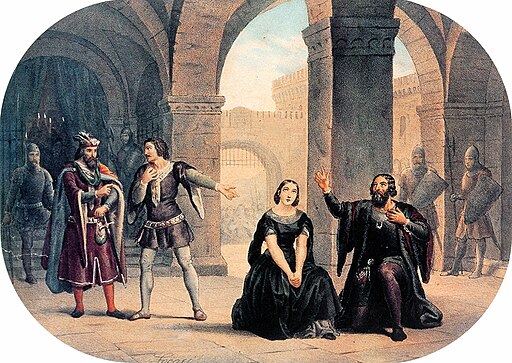 Recently added to our International Phonetic Alphabet database, In braccio alle dovizie,  Monforte’s scene and aria from act three of the opera I vespri Siciliani.

I vespri siciliani (Italian pronunciation: [i ˈvɛːspri sitʃiˈljaːni]; The Sicilian Vespers) is a five-act Italian opera originally written in French for the Paris Opéra by the Italian romantic composer Giuseppe Verdi and translated into Italian shortly after its premiere in June 1855.

Under its original title, Les vêpres siciliennes, the libretto was prepared by Eugène Scribe and Charles Duveyrier from their work Le duc d’Albe, which was written in 1838 and offered to Halévy and Donizetti before Verdi agreed to set it to music in 1854.